Looking Back at 2021: How the 3D Industry Changed Forever

Looking Back at 2021: How the 3D Industry Changed Forever 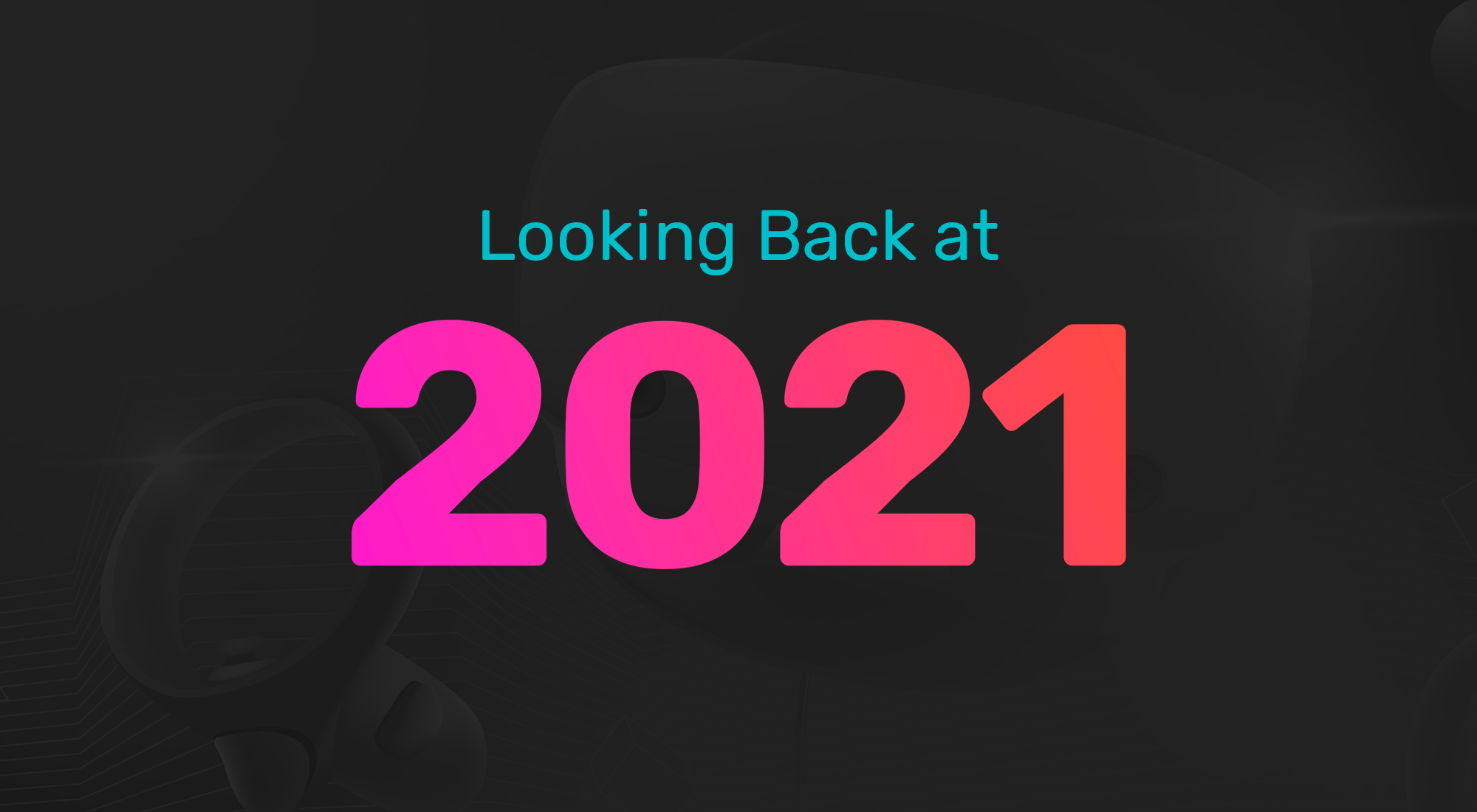 The 3D revolution is here. A culmination of technological progress and new commercial opportunities is transforming the way we work, play, learn, socialize and shop. Far from the days of disposable paper glasses, 3D is set to play a prominent role in the new digital era. After text, photo, and video, 3D is officially the next wave of digital content.

Over the past year, the ongoing pandemic drove sustained eCommerce growth, but an online presence alone will not be enough to capture customer attention in a post-pandemic economy. Especially when companies are discovering more engaging ways to bridge the gap between a digital and physical future.

As we round out this pivotal year, let’s take a moment to look back at the five biggest industry shifts to happen and what it all means for 3D in 2022.

3D is Essential for the Metaverse

The attention surrounding the hottest buzzword of 2021 is in fact a huge moment for 3D technology. Hailed as the next big opportunity in tech, 3D models and creators will be essential to the development and expansion of the Metaverse.

The idea is that people will soon be entering the Metaverse as an avatar of themselves in order to meet people, work, socialize, play games, and shop - all in a virtual 3D environment. Instead of using a computer or smartphone, you enter this virtual world using a headset.

Some people are already doing several of these activities in metaverses by Epic Games, Roblox, Microsoft, and Nvidia. While Meta announced it will invest $10 billion towards its vision of the Metaverse. But what is novel is the expansion of these opportunities to the mainstream, both from a business and consumer standpoint, as well as the intense competition between those fighting over control.

Another keyword to rise up this year is Web 3.0. Think of it as the engine that will power the Metaverse products and solutions. While the ideas are linked, they are not the same thing. Web 3.0 has to do with how users control their online identities and digital assets.

Viewed as the successor to the 2D internet as we know it, Web 3.0 is the creation of a more interconnected internet but in a decentralized way, using blockchains to allow users to create, control, and monetize their own content.

The Industry is in Consolidation

2021 saw more M&A activity in the 3D industry than in the last 10 years combined. Many of the world’s biggest 3D players were acquired in the first half of the year, signaling a commercial tipping point in obtaining 3D and AR capabilities.

Among the top deals, media licensing company Shutterstock acquired Turbosquid to expand its business from images, videos, and music to include 3D. While camera app company Snap acquired Vertebrae in order to expand its existing 3D and AR services to retail clients.

The consolidation signals a big shift in the competitive landscape at a time when the industry is experiencing an unprecedented boost in investment tied to scaling. For example, Mark Cuban and the former Oculus CEO announced investments in 3D eCommerce startup VNTANA.

The Rise of 3D in Ecommerce

Ecommerce was always destined to transform retail, but without question, the pandemic accelerated the digital shift. In 2020, anyone who could work and shop online started doing so. But a year later, people had already started to look to a post-pandemic future, and what our new reality might look like.

In 2021, the longstanding idea of eCommerce vs retail was thrown out. No longer seen as one replacing the other, it’s now about bridging the gap between online and in-store and taking advantage of technology to provide consumers with new retail experiences.

In this context, 3D/AR emerged as a lifeline not only for overcoming physical boundaries but also in response to the shift in customer expectations for more engaging and interactive experiences. Exposed to the many benefits of 3D over alternatives such as traditional 2D photography, a big switch is now in motion.

5G: The Breakthrough Technology for AR

First, is the general acceptance that you need web-native 3D instead of downloading an app. The app boom, while hugely successful for some, never really worked for 3D. Especially for items like furniture that are bought infrequently, many customers are put off by having to download an app for a one-off purchase. Web-native makes shopping with 3D and AR frictionless, as the capability is right there where you discover the product.

Second, is the roll-out of 5G, arguably the biggest breakthrough technology for wider AR applications, which involves adding digital overlays to live views. Seeing this information live requires an internet connection, and that’s where the ultra-low latency and high bandwidth that 5G brings is crucial. And not just for your smartphone. With 5G, the use case for smart glasses also finally becomes possible.

In a time of social distancing, social media networks helped keep us all connected. Although Mark Zuckerberg’s Facebook rebrand was a play for control, it also signals something bigger: the maturity of social media, and what the next phase will look like.

3D, AR, and VR have the potential to redefine social media as we know it. We’ve already witnessed several shifts from text to photo to video and how these trends have influenced the development of each platform. And now, the next wave of content is 3D.

Already, we are seeing communication across the platforms becoming more interactive through 3D advertising, filters, and effects. Meta is beta-testing its Oculus VR platform that allows people to explore a virtual world, connect with others, and play games. While Google, Meta, and Snap are investing in the opening up of interactive 3D advertising through their channels.

It is clear that we are entering a new era for 3D designers and creators, as well as richer and more interactive experiences for everyone. Across all industries, companies are evaluating what role 3D will play when integrating their business into the new digital era.

For eCommerce in particular, brands who are prepared and ready to scale up their business with 3D will gain a significant competitive advantage compared to those who have not. As the customer experience becomes front and center, brands that fail to innovate will be left behind.

Modelry can help you make the switch to start creating interactive 3D experiences, building a catalog of master assets that can be reused across teams and creatives. And it’s not too late or difficult to get started. Get ready to gear up your eCommerce strategy with 3D!

Lara Oliveira is a Content Manager at Modelry. With over a decade of experience writing across corporates and startups, she is now focused on helping companies innovate with 3D and AR technology. Reach out to her at pr@cgtrader.com to talk about possible content collaborations! 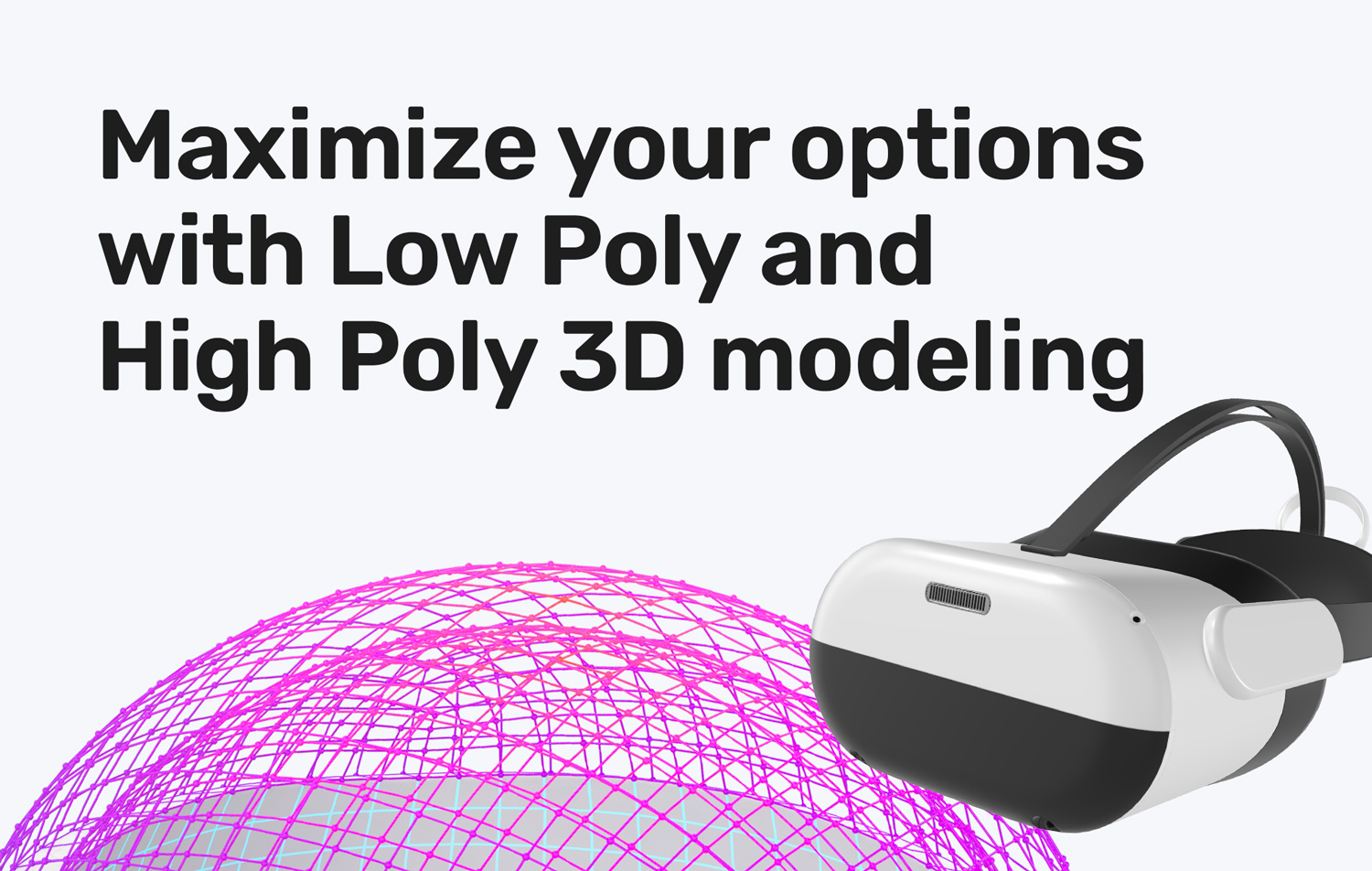 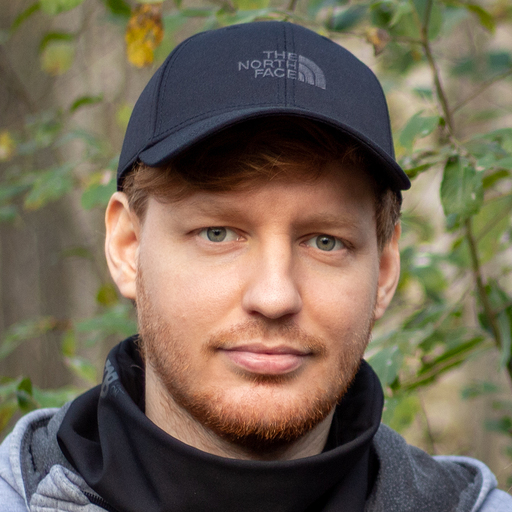 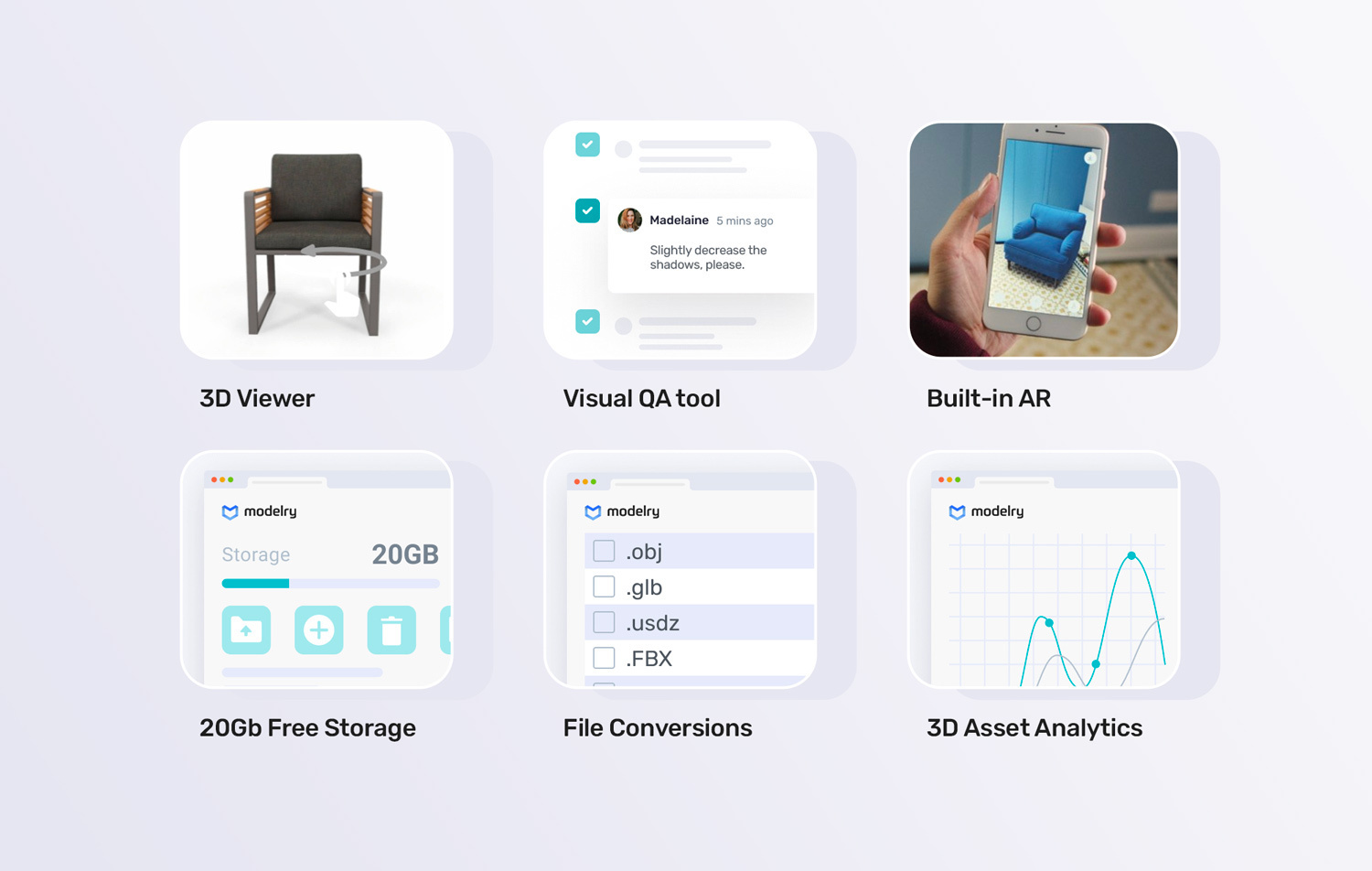 Why Businesses Should Choose 3D Modeling Platforms Over Freelancers 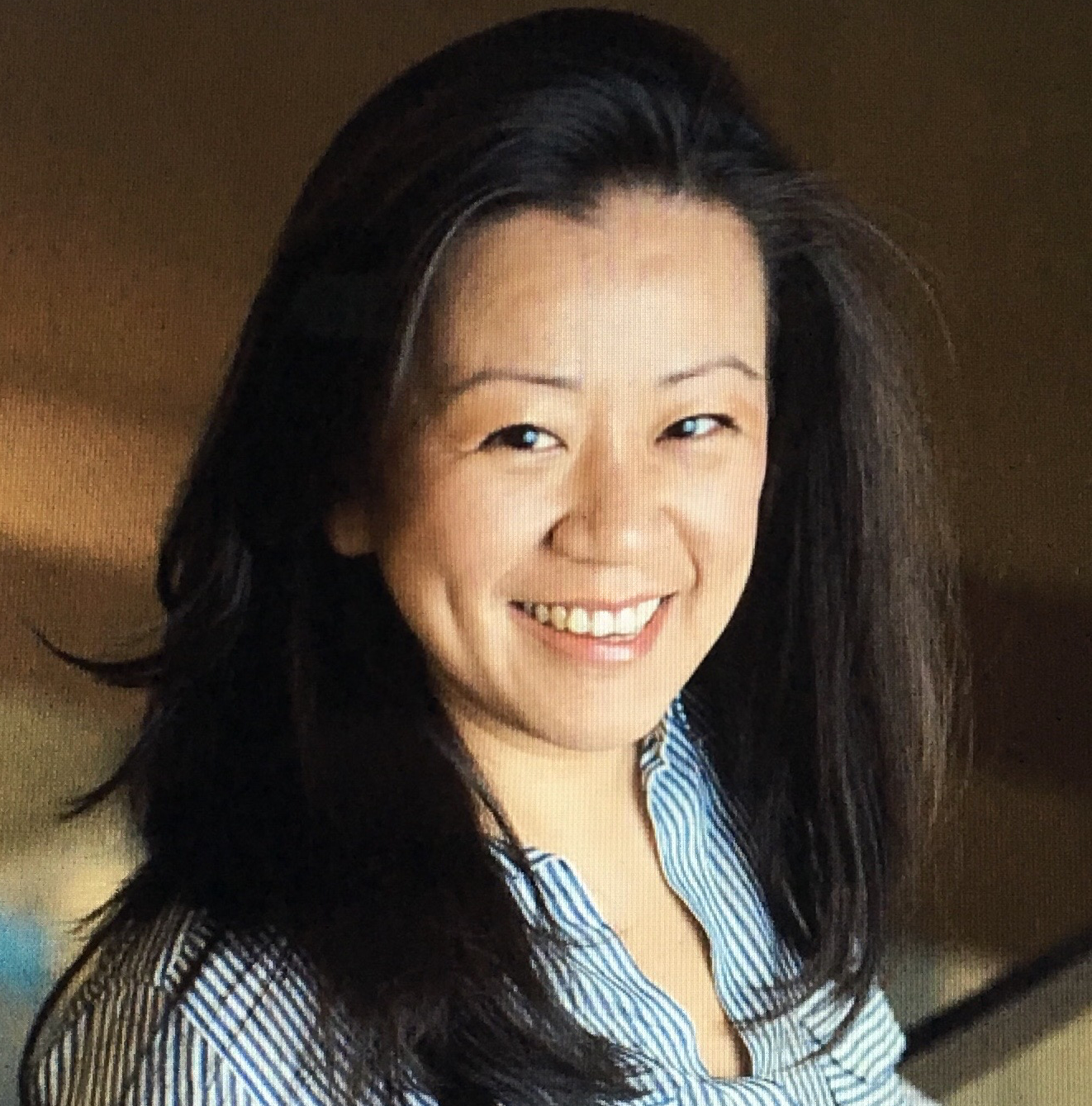 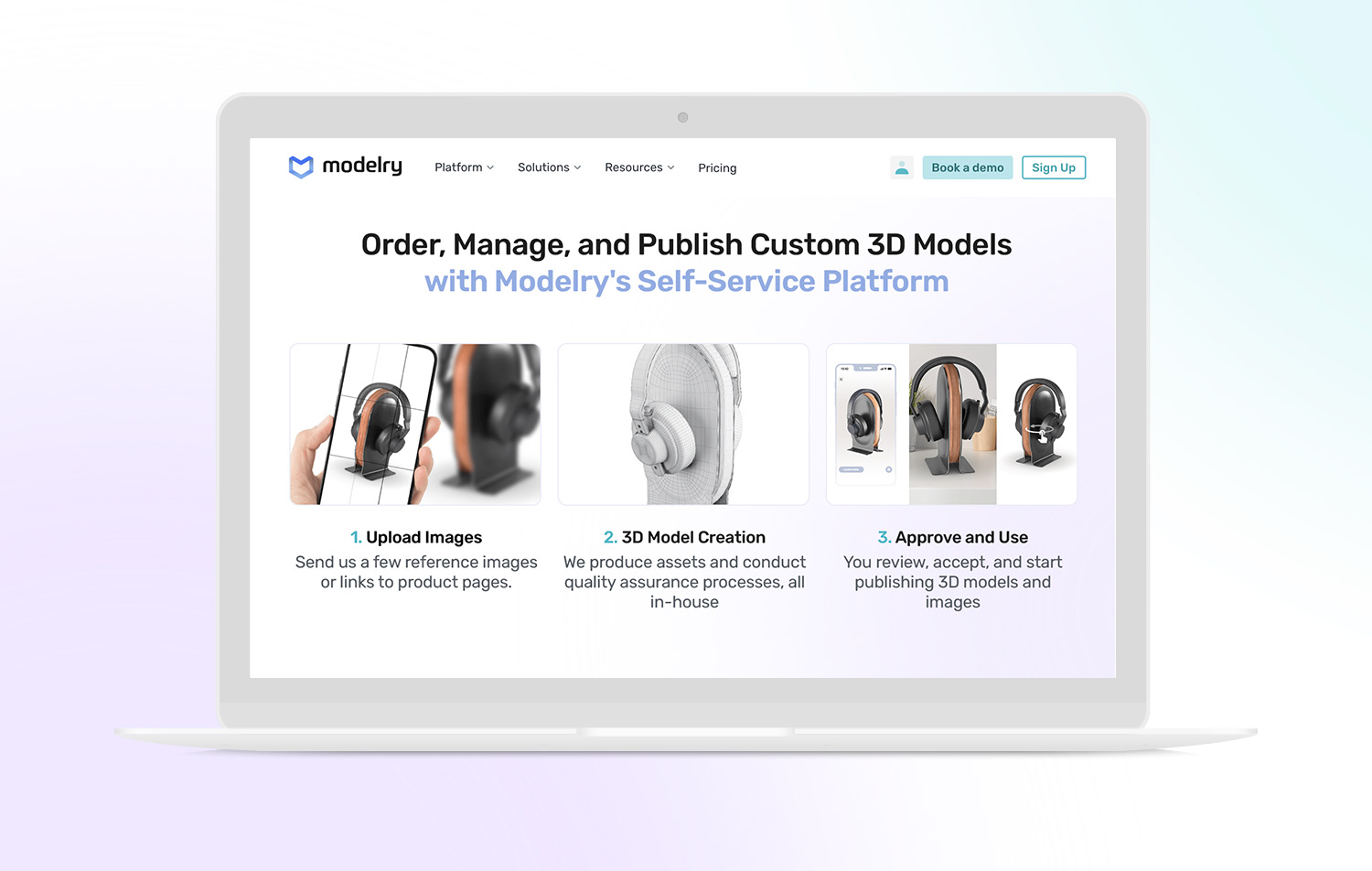 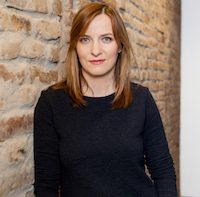 Schedule a call with our experts to get started quicker.